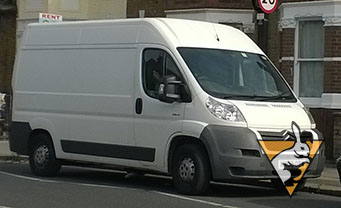 One is always way too quick to pass judgment on other drivers when we go about on our daily routines. We like to think of ourselves as good motorists, however this is very rarely the case. Very few people manage to abide the law to its fullest extend for whatever reason and we often break it in small ways: to save time, to make our lives easier, to be rude or simply because we cannot be bothered. Whatever our transgressions may be, they are often negligible, at least to the point where we do not seriously endanger or inconvenience anyone on the road, including ourselves. Everybody knows however to watch out for white vans.

This is a somewhat prominent phenomenon, one that certainly manifests itself in several European countries and possibly even more. Up there on the list, next to “Boy Racers” on being a major cause of both accidents, mayhem and general disgruntle,  drivers of white vans are statistically one of the most dangerous driver demographics. In a recent survey of what people think the worst drivers on the roads are, 43% of people thought that White Van Men were the biggest scourge on the road (beat only by young reckless males by a small margin)

White Van Man is quite a specific category and it does not include the likes of a person who simply happens to drive a large white vehicle. The term itself was first coined in 1997 by Jonathan Leake, at the time the transport editor of “Sunday times”. He went on to provide us with a detailed image of what such a person is like:

Admittedly this is beyond obvious but must be mentioned nonetheless. Vans like Ford Transit and Mercedes Vito come to mind, however the variations are numerous, only sharing a single trait: they are white (this is the typical colorations they are produced in, others cost extra). Now it goes without saying that not all van drivers fit the stereotype, however all the people who do fit it, necessarily drive a white van.

Of course not meant in a pejorative way, these people often view (and use) their van as a tool of the trade. They are middle aged males and could work in various fields: relocations (man and van services come to mind, especially those offered by subpar companies), plumbing, service engineering, arts, etc. Their vocation is not at all related to driving, however their vehicle is needed for what they do.

Probably the characteristic without which these people would not be treated as a separate group. They are pictured as selfish, overly aggressive, rude and inconsiderate on the road. Trying to explain why this is would be a rather pointless endeavor.

If you have the bad fortune of having to deal with a “true” white van man, it is best do proceed with caution and be ready for them to do something unsafe, especially if he himself thinks you are a “bad” driver. If you find yourself in the category, the only advice you should fallow is to stop being a white van man.